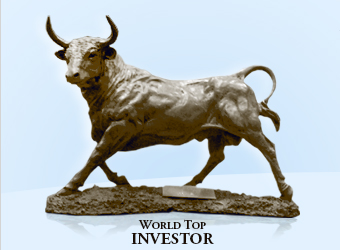 A programmer and algorithm designer from Poland is the winner of the 2011-2012 edition of the World Top Investor. He is currently coordinating a team of traders, programmers and developers in his company SmartTrading in order to create fully automated trading systems and trade his own money.

Pawel Olchawa came to this WTI with the intention to win the competition and with a strategy for that, using multiple accounts, and also using above normal leverage.

As trading philosophy, he uses a combination of technical analysis, fundamental data and proprietary metrics both statistical and methodological. During the last 12 months of competition his application allowed him to design strategies and divide any strategy into reusable pieces to integrate with fully automated trading strategies. He believes that with this approach the result is a series of sound strategies with promising results on historical data.

In the competition however the only strategy was looking for strong breakouts using extreme leverage and predefined stop and profit levels. Pawel Olchawa recognizes that the leverage applied is the result of having the knowledge of performance of the previous winners, and also recognizes that the use of multiple accounts was to hedge a series of breakout trades and limit downside risk.